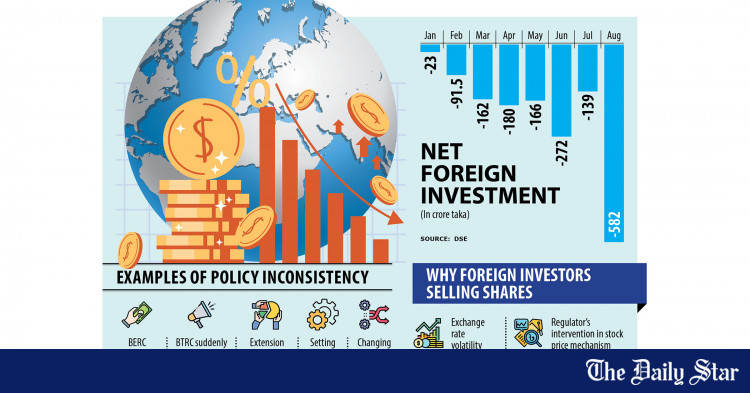 Foreign investors in the Bangladesh stock market are selling shares en masse as the devaluation of the local currency against the US dollar combined with various policy changes in recent years have reduced their confidence in securing decent returns.

Foreign investor sell-offs hit a 1-month high in August after the Bangladesh Securities and Exchange Commission (BSEC) set a floor price on July 28 to end the free fall of major market indexes amid global economic tensions.

For all the latest news, follow The Daily Star’s Google News channel.

Foreign investors bought shares worth Tk 86 crore in August while their sales amounted to Tk 668 crore, according to data from the Dhaka Stock Exchange (DSE).

Thus, net foreign investment this month was Tk 582 crore in the red.

The last time foreign investor sell-offs reached such a level was in February 2021, when they totaled 7.34 bln Tk.

The DSE has not officially disclosed such data since 2019 due to an oral order from the BSEC, but The Daily Star was able to independently collect this information from a confidential source.

“As fears of local currency devaluation grow, foreign investors sell stocks…their gains could be wiped out by the devaluation,” said Shah Md Ahsan Habib, a professor at the Bangladesh Institute of Bank Management.

“When the exchange rate was 82-85 Tk per US dollar, foreign investors started selling their shares fearing that the taka will fall further,” he added.

If the value goes up 10 percent, they can make a profit of the same percentage simply by redeeming their shares, he said.

“So they sell shares and wait for it (the exchange rate) to stabilize,” he told The Daily Star.

In addition, foreign investors would wait and see amid concerns about the country’s macroeconomic situation, he said.

Responding to a query, he said foreign investors don’t like the idea of ​​floor prices, especially for blue-chip stocks, because it makes them more difficult to manage risk.

A senior official from another brokerage house that deals with foreign trade, echoed Pasha, saying that foreign investors do not want to take risks in the face of foreign exchange instability because it risks eroding their funds, even if the value of shares increases.

For example, if foreign investors made a profit of Tk 80 on their shares in 2019, they would have received $1. Now investors need to make a profit of Tk 95 to earn the same dollar that the local currency depreciated.

However, this trend of foreign investors selling shares is not new, according to a commercial banker who prefers anonymity.

This washing of local stocks after sudden policy changes affecting investments has happened several times in recent years, he said.

Even overseas roadshows organized by the BSEC have not helped boost foreign investor confidence over the past two years, he said.

More importantly, the activation of the floor price along with the devaluation of the local currency prompted them to sell shares, the merchant banker added.

Meanwhile, the telecoms regulator’s move to designate Grameenphone as an operator with significant market power (SMP) in February 2019 played a big part in dampening confidence from overseas investors, who own around 40 percent of the company’s ditched shares.

The Bangladesh Telecommunication Regulatory Commission (BTRC) had declared Grameenphone, the largest publicly traded company in Bangladesh, as an SMP operator to increase competition in the market.

To that end, the telecom regulator has already made a number of decisions that will weigh on the business of the country’s leading wireless operator.

After the BTRC’s decision, foreign investment in domestic stocks started falling since March.

Brokers say foreign investors not only sold their stakes in Grameenphone, but other companies as well, as they lacked confidence in the market.

In 2015, the Bangladesh Energy Regulatory Commission lowered the distribution fee for the Titas Gas Transmission and Distribution Company. As a result, the utility lost more than Tk 3,000 crore in market value over a five month period.

Also, the closure of the market for about two months and the imposition of floor prices at the beginning of the coronavirus pandemic deterred foreign investors and they subsequently started massive sell-offs.

Trade was closed from March 25 to May 31 last year after the government enforced a nationwide lockdown to curb the spread of Covid-19.

On March 19, 2020, the regulator imposed the floor price to protect the shares from free fall, much to the dismay of overseas investors.