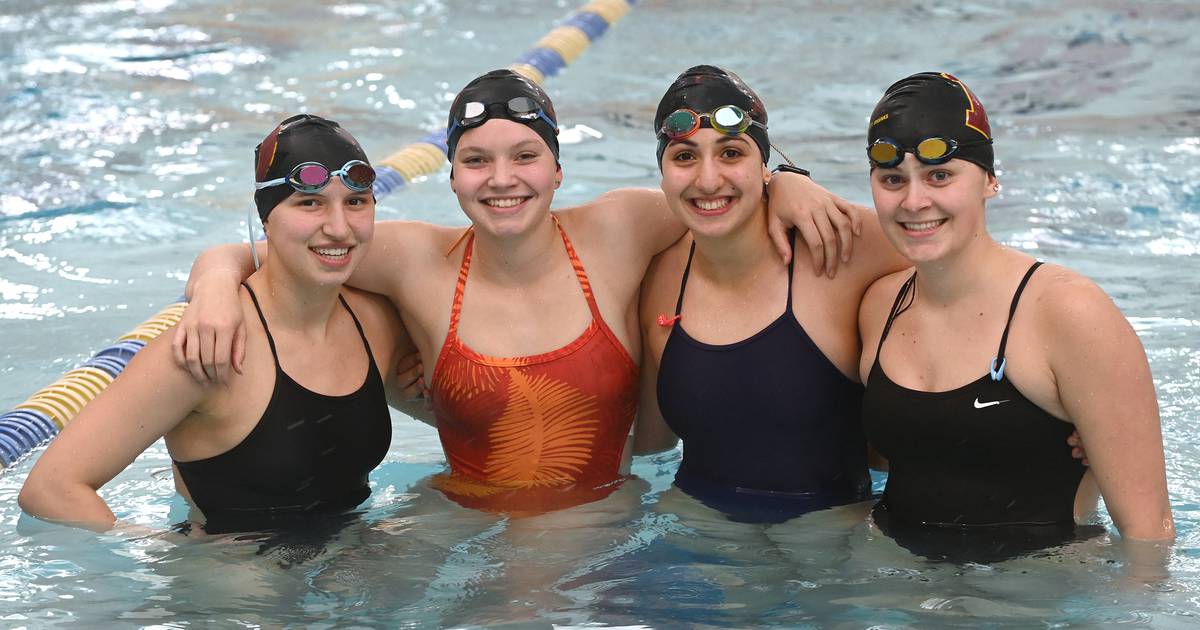 It has been almost a decade since any swim team other than the Dimond High Lynx has won an Alaska State championship.

The Lynx had several seniors who never knew what it was like to lose even a dual their entire high school career because they were undefeated in the regular season as well.

Scott O’Brien has been the head coach at Dimond since the 1994-95 season, with a hiatus between 1998 and 2002 when he coached at the University of Alaska Anchorage before returning to high school coaching for the Lynx.

Since 2012, the girls’ team has finished in either first or second place at the state championships and won six straight titles, except for the COVID-19 year of 2020, when there was no state meeting.

“It’s you, it’s not me,” O’Brien said of the girl’s recent unbeaten title streak. “No one wants to be the first to lose, so it kind of became a tradition that everyone just keeps feeding off it because everyone wants to keep the ball rolling.”

He said that throughout this impressive run, every group has been feverishly determined not to be the one to catch the streak, and that’s part of what drives them year after year.

The reigning national girls’ team champion is unbeaten in doubles matches so far this season with an unblemished 3-0 record.

The girls are powered by a core four that makes up their relay teams in seniors Hannah Boyce and Isabelle Borke along with juniors Leena Edais and Caroline Waters.

“I think we’ve had a really good season and I’m really excited to see how we work together as a team across the states and regions,” Waters said.

Dimond dominated the relay events at last year’s state tournament, winning the 200 medley, 200 freestyle and 400 freestyle events. This group aims to maintain the standard of excellence that existed before middle school and that most of them have played a role in expanding.

“We all get along so well, but we also get a daily reminder that we need to keep up with this winning streak and we don’t want to be the year that we lose,” Waters said. “It’s a balance of having fun but also knowing that you have to make an effort because we’re past that.”

As teammates, they also compete daily and know that the best competition in the state is likely on their own list.

“Everyone at Dimond is the best of the best, so we get to go up against the top contenders on our team, so we get a challenge,” Borke said.

“I think it just drives us to get better and better every year,” Boyce said. “We’ve all been racing against each other for years. Someone is better in an event and someone is better than the other, so we all push each other to be faster.”

She described their dynamic as “friendly competition” because they want “everyone to do their best.”

O’Brien has known them all since they were in elementary school because he is also the coach of their club swim team.

“You learn over the years what motivates each kid,” he said. “Some kids have to put your arm around and say, ‘Hey, you can do this,’ and some you have to put (motivate) into gear and go.”

Three of the members of the “Core Four” placed at the state finals last year, with Edais being the lone exception after she qualified for the state but was not placed.

“They sort of took her under their wing and they’re going to try to get her to become that fourth corpse to replace some of the kids who graduated last year,” O’Brien said.

The Lynx lost some of their best swimmers to graduation last spring but are delighted with the opportunity it is creating for the likes of Edais and others to step up and shine.

Dreamer Kowatch is a prime example of a senior from last year’s team who has left a void now that she is competing at the collegiate level at Division I at New Mexico State University.

“It’s a big loss because of the leadership and flexibility in the squadrons, but it’s a great opportunity for the Leenas and the Paulas (Morales) and the Paiges (Antrobus),” O’Brien said. “They got to swim with Dreamer at the club to see their work ethic.”

The members of the “Core Four” spend more time together out of the water, building camaraderie and growing closer as friends than honing their skills in the pool.

Group members share a similar sense of humor and enjoy engaging in fun activities like yoga, working out at the gym, going on hikes, cooking meals, and going on picnics.

They study together and some of them also have the same classes and get together for weight training sessions.

“We have team parties where we get together and eat after Friday meetings,” Boyce said. “We just eat and hang out and everyone gets together and talks about racing and about things outside of swimming.”

When they have their group meals, the host is responsible for the main course, but everyone pitches in by bringing drinks and sides.

O’Brien believes their chemistry and friendship outside of sports is directly related to their success in the pool.

“That’s one of the most important things. They want to do it for each other,” he said. “They don’t do it for me. No one wants to be the person to let down any of the other three.”

The boys team is still strong despite shallow depth

For the past 15 years since 2007, the boys team has finished first or second with the exception of the 2020 season. During that time, they had a stretch from 2009 to 2015 where they won seven straight titles and have finished runners-up every year since 2016.

Although he admits this year’s boys side isn’t as strong as last year, O’Brien still believes they have “a lot of top quality” and they are also unbeaten with a 3-0 record.

“We’ve got the returning 50 (freestyle) state champion in (Andrew Billings), we’ve got Will (McKinley) who was in the top four of two events last year, so we’ve got a good group of guys returning,” O ‘Brien said. “We just lost a little bit of depth after graduating some seniors last year.”