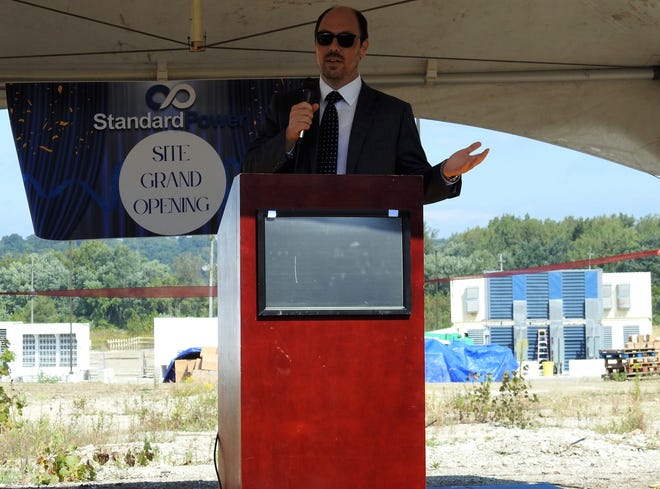 COSHOCTON — A cutting-edge technology company in a burgeoning industry opened a new facility in Coshocton on Monday. It is one of the largest of its kind in Ohio.

Standard Power held a tape average at its blockchain and data center at 500 N. Fourth St. on the site of the former WestRock paper mill, which closed in 2015. Standard Power bought the property in October 2018, and former Mayor Steve Mercer first endorsed the company in his January 2019 State of the City speech coming to town.

The event included exhibits and demonstrations related to immersion cooling, miner maintenance and management, and the benefits of a Bitcoin mining data center in Ohio. Official comments were made by local and state officials, including Lt. gov. Jon Husted.

“There’s a natural transition between the old way of doing business and the new way of doing business. I find it incredibly ironic that this is the site of a former paper mill and is now a digital paper site, so to speak.” said Husted said. “The legacy of this site is that it required a lot of energy for its previous function as a paper mill and it also needs a lot of energy to fulfill its new function using blockchain technology. We can use the existing infrastructure for these new types of applications.”

Blockchain is the creation of a public, digital ledger that can be used for data and digital transactions. Because it provides added security and saves time and money, the technology is increasingly being used to transmit car titles, record real estate transactions, and automate government paperwork. It is also used in payment processing, legal contracts, healthcare records, data sharing, and digital identification. Ohio law even allows local governments to use blockchain technology.

Currently, the Coshocton site is dedicated to Bitcoin, but Standard Power CEO Max Serezhin said creating a traditional artificial intelligence data center is a goal for the future. The facility has about 20 employees, but Serezhin hopes to have more than 100 employees by the end of next year.

Standard Power now has 50 MW of data mining and is developing 700 MW in the burgeoning Conesville Industrial Park, the former site of an American Electric Power coal-fired power plant. Serezhin said they are already hiring for this project, which should go live by the end of Q1 2023.

Serezhin said Standard Power is auditing 15 to 20 locations across the country. They considered energy markets, local environments and available infrastructure. He said the open arms of the local community are an important factor for Coshocton.

“When we started, the mayor and community representatives were really supportive. A place that doesn’t see much technology is sometimes challenged to accept new things. What we saw were interested, curious, hopeful people who wanted to learn and be involved. We haven’t seen people hostile to us,” Serezhin said. “A lot of people who are afraid of change don’t know what it is and they don’t want anything to do with it. This is definitely not that kind of place .”

Mayor Mark Mills said the future belongs to Coshocton now. He is grateful for the commitment Standard Power and the Ohio Blockchain Council have shown to the community. With Intel’s new chip factory less than an hour away in Licking County, Mills hopes Standard Power will be the first of many new companies looking for a location in the area.

“Coshocton is open to business and we welcome any new idea or business. We are definitely poised for the future,” said Mills.

Ohio Blockchain Council’s Andrew Burchwell said there are several small blockchain operations in Ohio, but the new one in Coshocton is one of the largest and one that shows the potential for Ohio to grow in the blockchain space. He believes there are hundreds of small towns like Coshocton across the state that have the right elements that blockchain developers are looking for. The recently formed organization will join industry leaders and blockchain and bitcoin developers to present a unified voice committed to advancing technology in Ohio.

“When people realize the untapped energy potential and infrastructure already here in Ohio, there will be a gold rush of Ohio companies to build infrastructure, create jobs and create data centers that will enable Ohio to become one of the strongest states for this industry,” Burchwell said.

Leonard Hayhurst is a community content coordinator and general news reporter for the Coshocton Tribune with nearly 15 years of local journalism experience and multiple Ohio Associated Press awards. He can be reached at 740-295-3417 or llhayhur@coshoctontribune.com. Follow him on Twitter at @llhayhurst.